Text to my “little” brother John: “SO proud of you and have SO much fun!!! Sending you some Jazz Fest ~vibes~ from NOLA.”

I am not at Jazz Fest.

I am not in New Orleans.

I woke up, at 4 am Friday morning, and hopped on a flight to Philly.

And sent the text to my brother from a friend’s sofa in North Philly.

The back-back story of all of this is that on a Friday this past December, John was diagnosed with Multiple Sclerosis, or “MS” for short.  In medical-speak, MS is an oftentimes debilitating autoimmune disease in which anything from tingling to full-body paralysis can happen.

In every day speak, his body is attacking his brain.

According to my mom, he says this because he is the “chillest” of the four Walker siblings. “Chill” meaning that his superpower, which is so rare and so special and so often overlooked, is that he cares about other people.  Always. He cares about his friends, his family, the Flyers, his neighbors, people half way across the world. Not that I’m biased or anything, but he might have one of the biggest hearts of anyone I know.

But of course we were –are– worried.  There is no cure for MS.

As a big sister, I can’t smash MS into pieces like a bully teasing him on the playground. I can’t zap MS to smithereens or sneak-attack MS with poison-filled darts or pull out the big-sister card and dismantle the disease with words.  MS just doesn’t work like that.

Frustrated, I asked him one day, “What can I do to help?”

“Well, I’m thinking of doing this walk downtown, gonna try and raise maybe like $200, get a couple of people out there,” he responded, shrugging his shoulders, “Maybe make a t-shirt or something?”

“That’s Jazz Fest weekend,” I replied, “I’ll FaceTime you or something.”

He shrugged his shoulders again, registered a team with the National MS Society, and set a fundraising goal of $200: “Whelp, at least a couple of people’ll come out.”

My dad called me three weeks ago with an update:

“A couple of people” was turning into almost 120—

family, friends, parents of friends, and a whole busload of students from his alma mater.

And promptly searched for flights from New Orleans to Philadelphia.

And told none of my family members.

Because if there’s one thing I’ve come to realize over the years, it’s that people are worth showing up for.

And if there’s any way in my power that I can be there and show up for them, then hell, I’m going to do it.

Saturday morning, a friend dropped me off at the steps of the Philadelphia Museum of Art– “GOOD LUCK!” she shouted as she drove off.

I walked towards the steps, looking for the tall hulking people I call family, spotted them, ran up from behind, dropped my backpack, and shouted “SURPRISE!”

And was greeted by a series of expletives, tears, and deep deep shoulder-wrenching hugs.

You may be thinking by this point, “Wait, but I thought this was dedicated exclusively to New Orleans?” And yes, this whole Project started out as a means to fill my days, provide myself with a creative outlet, and to say goodbye to the Crescent City.

But what I’m coming to learn and to realize is that rather than a goodbye to one city, The June Project is turning into one huge gigantic THANK YOU to people and places that matter most.

Is turning into a way of recognizing, expressing, and sharing love to so many places and people, big and small, that have shaped my life.

So if someone happens to find the letter I left in a bright yellow envelope in a crevice of the Art Museum steps, I hope it inspires you to smile a little more brightly, to love a little more deeply, and to leave it all out there for the people you love.

Because they matter.  And they deserve it.

And quite frankly, they don’t hear it enough. 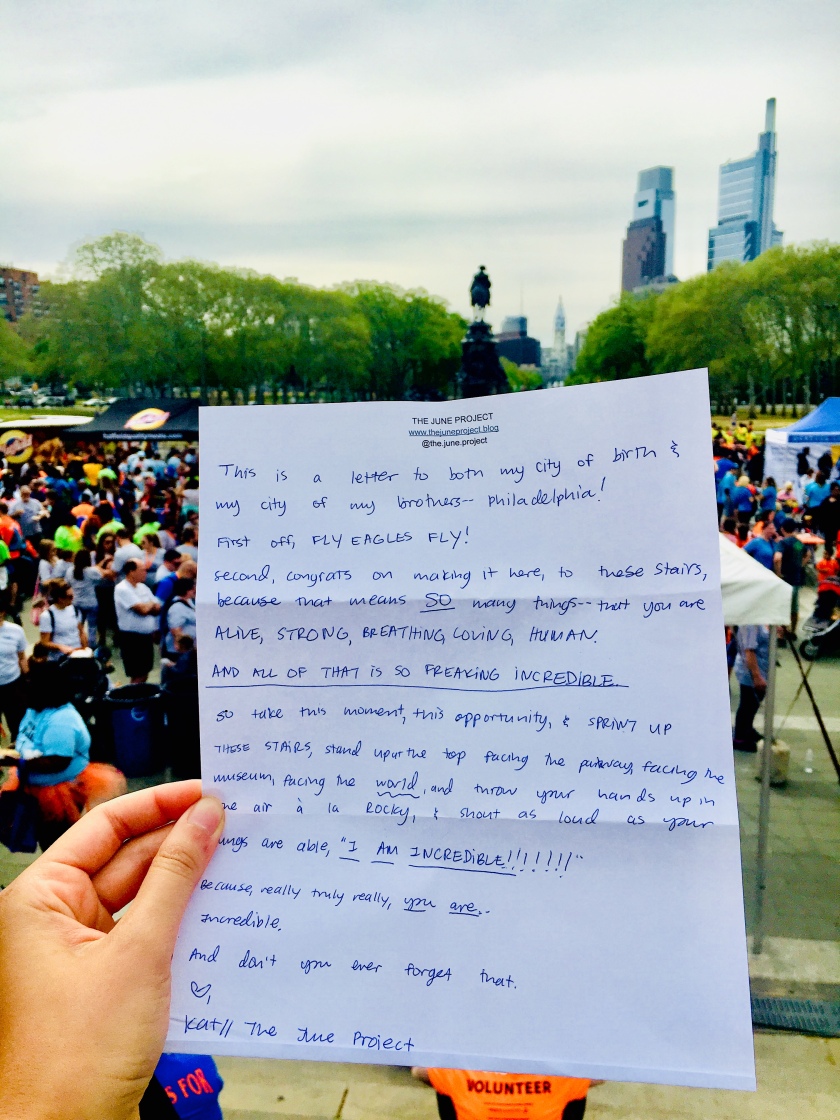